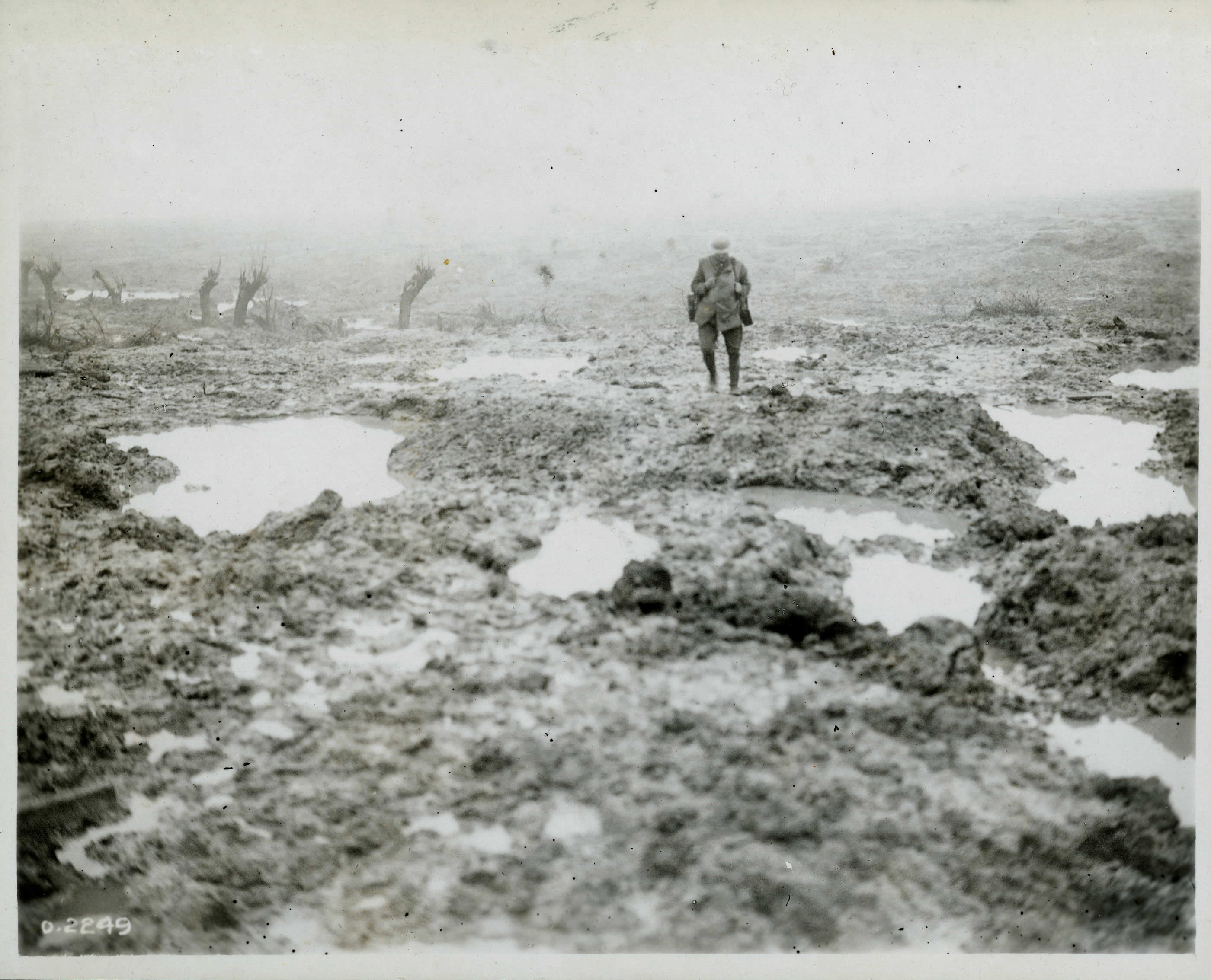 As the Russians on the Eastern Front began to pull out of the war in 1917, Field Marshal Douglas Haig worried that the redeployment of German soldiers on the Western Front would damage the war effort against the German Empire. With his options thinning out, Haig proposed a quick offensive on the Western Front to push the front line from the city of Ypres through the German 4th Army’s defensive position to reach Passchendaele, a small town about eight kilometers from a city with a railroad that supplied the German Army. The start of the battle on July 31st was marked by ten days of artillery bombardment against the German positions, doing little damage to the fortifications that had been previously built up followed by the allies’ infantry attack. In the south the French First Army, led by François Anthoine, and the British Second Army, led by Hubert Plumer, made strong progress. However, the British Fifth Army, Britain’s main force led by Hubert Gough, made little progress in the North. Throughout the battle, unrelenting rain poured down onto the battlefield, transforming the ground into a muddy swamp and filling artillery impact craters with water. These conditions caused the battle to slow to a halt, as most movement and advancement attempts were prevented by the horrid conditions. Mud clogged up guns, tanks became stuck, and some infantry and cavalry units drowned in the marshy ground. The deaths of 275,000 British soldiers made it clear that without extra help, the battle of Passchendaele and the remainder of the British campaign would both be a lost cause. After the British, French, Australian and New Zealand troops all failed their assault on the German defensive positions, the Canadian Corps, led by Arthur Currie, were called in October to help salvage the battle and the British campaign. Currie initially objected to sending Canadians into the battle due to the likelihood of high casualty rates. However, he eventually realized that with Canadian help, the British war campaign would die out and the Allies would take a devastating blow. When the Canadians finally arrived at the Western Front on October 26th, Currie ordered for better roads, improvements to the gun-pits, and the transportation of artillery shells to the front line to prepare for an improved infantry attack. On November 10th, 1917, the Allies, with the aid of the Canadian forces captured the village ruins of Passchendaele, ending the battle of Passchendaele. That day, the world learned that Canada was no longer a weak puppet of Britain, but a strong military force independent from Britain’s rule.

Similarly to the Boer war, another war in Canada’s past involving Britain, Canada was divided over whether they should continue to support Britain in their military endeavors, specifically the battle of Passchendaele. However, the stark opinions over the Boer war had mostly faded. Most British people still wanted the Canadian Corps to be sent over to support Britain against the German Empire, while a few argued that young Canadian men should not be dying in Europe for someone else’s war. However, the Canadians directly involved with the war effort viewed the battle as a noble cause, and realized that it was in Canada’s overall best interest to help the Allies stop the Central powers. Despite this, many Canadians such as Arthur Currie were reluctant to go into the battle, due to the conditions and the outlook of the battle at that point. However, after the Canadian Corps helped out the Allies in securing Passchendaele, the general public of Canada saw the decision to send the Canadian Corps in as a great idea, and boosted the morale of the country, as well as the outlook of the war.

After news of Canada’s Army returned from Europe regarding the battle of Passchendaele, views of Canada as a military force had changed dramatically. It had been a widely known fact that the Canadian Corps sent into the battle of Passchendaele were a very small group compared to the British and German Armies, but their arrival tipped the scales in the allies favor, allowing them to reach their goal of capturing Passchendaele. When Canadians heard about this, the country’s morale was boosted, changing the way that Canadians thought about their military strength. Compared to the outlook on Canada as a weak military power during the naval issue that occurred during Laurier’s time as Prime Minister, the country’s reaction after the battle of Passchendaele replaced the shame with pride for the Canadian soldiers that completely changed the outcome of a battle.

The battle of Passchendaele solidified Canada as more politically autonomous, as Britain did not force them into battle like a pawn. Canada also made the biggest difference when they joined the battle; months of hard-fought battles had worn down the British in the battle of Passchendaele and with the British campaign morale running low, Britain was in no condition to bark orders at Canada. Instead, Britain and Canada were now at an equal level, rather than an empire and a push-able colony. Canada was persuaded to help instead of forced, and although Canada could have chosen to break away and ignore the war, it decided joining in the war effort  and supporting the Allies was in its best interests. This led to the deployment of the Canadian Corps onto the battlefield which drastically changed the tide of battle. Arthur Currie, though he had just recently showed up to the battlefield, was allowed full control over most of the processes and preparations that went on before the infantry attack, showing us that Canada was given some political power to call the shots independently. In addition, the Canadian Corps, although lower in numbers, helped the allies claim more land and led the final push to the ruins of Passchendaele. This showed the world that Canada had not only become politically independent from Britain, but also was a strong nation without much help fully autonomous in it’s decisions. This also affirmed the beliefs of Robert Borden, Canada’s Prime Minister during the world war one, that Canada had reached independent nationhood.

Canada’s participation in the battle of Passchendaele also made them socially autonomous as well. While the British campaign was beginning to fail, and the British morale began to drop, Canada’s morale was high despite the state of the battle. As soon as Canadian troops came to relieve the British and Australian troops, the morale of the allies was boosted, showing that Canada’s own social climate independent of Britain was strong enough to affect and boost the morale of other countries.

For this image, I had to use a lot of parabolas and circles to try to get the curves around the outside of the dog right. I ended up using a mixture of square root, linear, quadratic and cubic functions as well as a few circle relations. The box around the dog was a bit easier, since i only had to use linear equations to trace the outline. However, it was here that I learned how to use domain and range more effectively, which allowed me to go back to refine the outline of the dog and clean up any lines that could be split into two parts. To make the facial features I mainly used parts of circles and parabolas and then learned how to use inequalities to shade in the parts. The main challenge I faced was trying to get into it at first. Initially, I tried to make an image of a dog, but without any guiding image to follow. This proved to be difficult, and while I did start over and restarted with a background image, I found it easier and easier as I progressed along. However, now that I had the background image to work off of, I managed to find a strategy to make the process easier. By creating the line at the origin first, I would then be able to create the shape first, match it up with the place it had to go, then move it to the correct position and finally, apply the domain and range. Overall, this was a fun, but challenging project that stretched the bounds of my graphing knowledge.